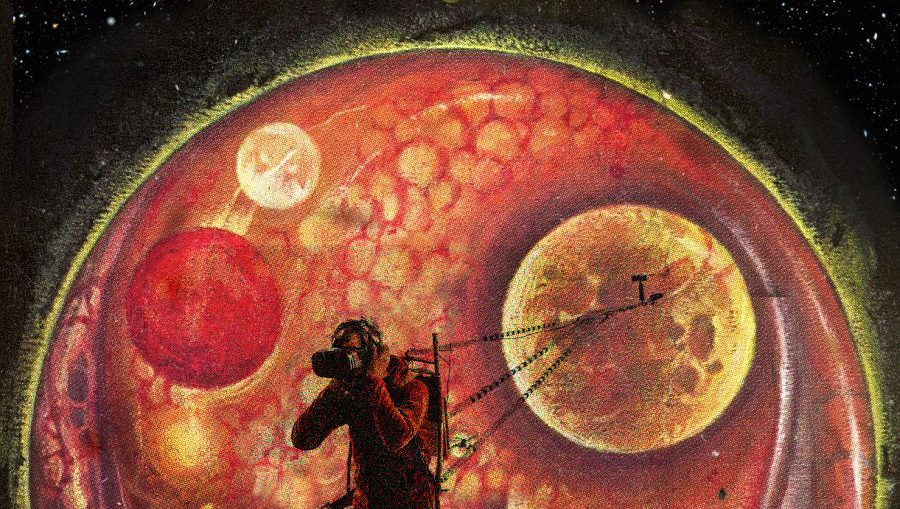 “I find it has been helpful to break away from the thesis writing and experiment with other ways of writing just for fun. Recently taken part in several creative writing courses and have learnt some great exercises such as; thinking about the thesis as a story, writing your thesis in 9 sentences, writing a 1 min and 5 min thesis talks.

I found that trying to get all the ideas in the thesis across in a short space really helps work out the key messages I need to communicate. Since I enjoy science fiction and my thesis is on the subject of science and art; I thought it would be fun to try writing my thesis abstract as if it were a catchy back cover blurb for a vintage sci-fi book. Here is the result:

Explanation to some of the ideas here: I work between science and art, a do a lot of DIY and tabletop experimentation. The main subject of my research are illusions and hallucinations; to study these I did a lot of workshops; these are my research tools. I started calling these ‘interface objects’ [related to boundary object theory and collaboration] and they kind of took over and became the contribution to knowledge. In the image I have inserted an image of myself doing an experiment; trying to recreate a self-induced out of body experience.”

BEYOND THE INTERFACE OBJECT﻿

Antony Hall has been stuck in a loop of tabletop experimentation which sent him on a journey deep into interdisciplinary space, somewhere between art and science. Suddenly, he finds himself cascading deep into a vortex of self-reflection and practice led research. Lost; he takes action by devising a radical new art-engine that will help him find a way out. On his action-packed journey through interdisciplinary space, he encounters elusive beings, the perceptoids, who manifest themselves only through strange experiences: hallucinations and visions. Hall finds himself questioning his own sense of self. In his laboratory he quickly improvises a number of complex experience machines to communicate with the perceptoids, but the machines begin self-replicating and take on a life of their own. They call themselves the Interface Objects. Hall relentlessly pursues subjects for his experiments, feeding them into the Interface Objects, but they are never satisfied and just grow hungrier. After such a long time exposed to his own experiments, Hall starts to notice the Interface Objects are having a transformative effect on the very fabric of reality as he sees it. Driven almost insane by his own research, he realises his own destiny is now lethally entwined with the Interface Objects. Could it be that he has become the architect of his own demise?