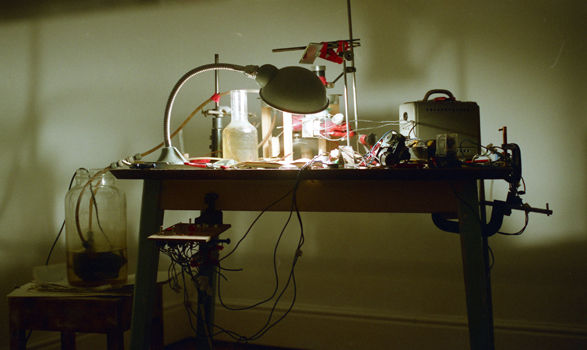 I wrote this as part of my thesis to explore the formative years of my practice (Tabletop Experiments) and its subsequent reimagining through the thesis research. Which emerged as workshops, boxed kits and instructional work). This text was meant to supplement the introduction and precede the methodology section, which stands as a more forward-looking exploration of my practice.

The question, “But, what is that you actually do?” [1] was posed to me as an impressionable master’s student [2] after having presented my entire portfolio of work; the question perplexed me because, at that time, my practice was still developing, and I still wasn’t entirely sure what it was that I was doing. Later as an emerging professional artist discussing practice, this straightforward yet wise advice was given by a curator; ‘Think of a thing that you do, and keep doing it’ [3]. The thing was, even though there was clearly ‘a thing that I did’, having embarked on the foundational works that would inform my practice for many years to come, it took years to realise what it really was that I did.

The Tabletop Experiments project was a manifestation of a long-term desire to realise a personal laboratory space for the creative practice of science [4]. In the early TE work, I transplanted my studio table to the galleries and workshop. There was a focus on the observation and detailed recording of the experiments and of the phenomenon. I presented detailed journals and instructions with the work in the gallery rather than contextual texts relating to art theory.

Vintage science writing[5], and other scientific stories often form a point of departure for a work or series of works [6]. Experiments were re-created and expanded upon using household items, augmented vintage projectors, and sonic oscillators constructed with drain pipes and coffee cups [7].

These works operated between open studio and live events, a fusion of creative and scientific processes. If I was not present with the work, an empty seat at the table suggested my presence, along with the recording devices, notes and other residual equipment left through the exploration process [This concept transfers through to the notion of interface object theory developed later in my thesis].

In 2004 under the mentorship of artist David Harding [8], to address this problem of working out what it was that I did, I wrote the following personal statement in 2005:

“My work is inspired by natural phenomena, such as the physical behaviour of liquid, the physiology of animals, or phenomena of human perception. This process involves locating and identifying specific behaviours and developing control structures [devices & instruments] within which these unique phenomena exist. Perpetuating their existence for extended observation, study and experience. These often take the form of ‘tabletop experiments’ forming discrete environments, electrical, biological or chaotic, but always functional assemblages. They are created in order to sustain or nurture, to resist entropy. For example, a perpetual vortex in a coffee cup, maintaining the turbulent patterns of oil on water, or sustaining the life of microorganisms in a droplet of water. These works are carefully, even precariously, balanced systems, which (being susceptible to change within themselves and the environment that directly surrounds them) demand nurturing. Through presenting active processes, the work is a continuous play on potential failure and possible solution, where failure is as important as resolution”

In 2019 reflecting on this statement of practice through the writing of my thesis and conversations with Proximity Collective [9], I wrote an updated version as a manifesto or tabletop experiments to highlight the key ideas that form a backdrop to my practice[10]:

1. The Tabletop Experiment is essentially amateur and DIY in its endeavour. It concerns science as recreation and as a practice that necessitates its own re-creation.

2. The Tabletop Experiment is that which can be assembled from items readily available in the home; kitchen utensils, ‘domestic technologies’ liquid soap or aquarium parts for example.

4. The Tabletop Experiment is a discrete environment: a device or instrument within which a unique phenomenon can exist. Ideally, this should be a rapidly developed prototype, which affords an aesthetic interplay between materials and technologies, driven by incidental function and serendipitous accident.

5. The Tabletop Experiment must be sustained, maintained and nurtured: These systems being susceptible to change within themselves and the environment that directly surrounds them, should be a precariously balanced system which demands nurturing. A thing on the cusp of failure. For example, A vortex sustained in a coffee cup, of turbulent patterns of oil on water, or the life of microorganisms in a single droplet of pond water.

6. The Tabletop Experimenter should make time for focused study and experience. Make use of technologies to extended and expanded observation through amplification, projection, and magnification.

7. The Tabletop Experiment must be an active process or an artefact of such.

8. The Tabletop Experimenter should embrace failure.

This list of 8 points can be further simplified to 4 basic steps in order to focus closer to the underlying rationale of tabletop experimentation:

Both the tabletop and the plinth have acted as integral component devices in the work. Sometimes, my studio table would be temporarily transplanted directly from the studio into the gallery[12]. Sometimes a chair would be present at the table, suggesting the presence (or potential presence) of the artist [13]. In this way, the artist is never entirely removed from the work, emphasising the work’s un-finishedness and the procedural content of the work. It also implied an element of maintenance [which I would come to see as a performance-like process [14]). Generally, these works would look like science experiments. These are processes set in motion to perpetuate a phenomenon, ie; to perpetually sustain a vortex in a coffee cup[15] which Wes White described as a ‘never-ending magic trick’ (White, 2020). The work often embraced the incidental and emergent elements of the studio practice, such as leakages and spillages[16], which sometimes became the work’s main content, a puddle of ink continually draining away [Perpetual Puddle Vortex 2001] and ‘Projection with fluids 2014’, in which a number of leaking pipes which drip into small containers, these had to be refilled and cleaned on a daily basis [17]; herein the performative aspect of the work comes in its maintenance and nurture.

Later iterations of the works were eventually shown on plinths [Perpetual Puddle Vortex 2012 and 2014, Bubbling Mass 2014, Ink drip 2012 and Coffee vortex 2015 ] as the works then had moved towards a more finished state, but these still required maintenance. The plinths serve not only as a surface [ideological and physical] to elevate the work to the attention of the viewer – but also as a container device hiding the complex mechanisms that sustain the work. Furthermore, the objects disrupt traditional notions of art; they are amorphous and immaterial processes.

In PhD research, the boxing of kits and artefacts serves a similar purpose to the plinth, refined ‘objects’ clearly recognisable as art. However, these have a subversive function. As with the plinths [mentioned above], which require permanent ongoing maintenance of the objects that appear to present; The boxed artefacts [kits and resources] are not obtainable unless the work is experienced [activated/validated] through the workshop; they require interaction between a practitioner (not necessarily me) as well as the active participation. Ie, they must engage in discussion and interaction in order to have experienced the work.

[4] “As a child, I distinctly remember creating a cardboard sign with the word ‘Lab’ scrawled on it, string crudely taped to the back. I hung this over the door handle and closed the door. Inside I created my own lab space with a chemistry set up and microscope.” Interview 2011 (Bradbury, 2011)

[5] An important point of reference for the original Tabletop Experiments project was a book called ‘Recreative Science: A Record and Remembrance of intellectual observation 1860’ the book contains a number of articles from amateur scientists which were “focused on aspects of natural history and other branches of science that readers could try for themselves at home or in their local area” (Shuttleworth, 2014) The book contained musings on such things as the microfauna of the interior mouldy nut, the construction of a homemade telescope, and pond life and detailed discussion on the art of making vivarium’s This can be considered as a predecessor to Scientific American, which published articles from armatures and professionals, often with advanced instructional materials for DIY projects, also a processor to maker culture and instrucatbles.

[6] The ‘Observers Book of Pond Life’, for example, inspired ‘Pond Life’ Gallery 39 Cardiff 2001, an interconnected system of projectors and micro aquariums, a version of which was revisited as workshops in 2009 at Manchester art gallery and later at Manchester Library 2017. The book ‘Experiments With Soap Bubbles’ by CV boys formed the basis for an exhibition of the same title at Castlefield Gallery’s Project Space 2005. These books formed the inspiration for sciart workshops delivered in schools across the country and continued to inspire a number of works between 2005-2018.

[7] At once repelling and fascinating, the cultures transform into a whole arena for events and play host to a zoo of minuscule insects. Over time the surface of the coffee mould becomes a velvety garden, a diverse and alien landscape populated by strange beings. Hall enlightens our experience with a written account of his own observations over the duration of the project.

[8] David Harding, is a Scottish artist and Head of Environmental Art and sculpture at Glasgow School of Art.

[9] Personal communications, in relation to artists manifestos and Proximities MANIFEST NO 2019

[10] Reflecting a few years later (2022) , I realise this was also an epitaph of sorts. I needed my practice to move on. Writing the manifesto helped finish unfinishable.