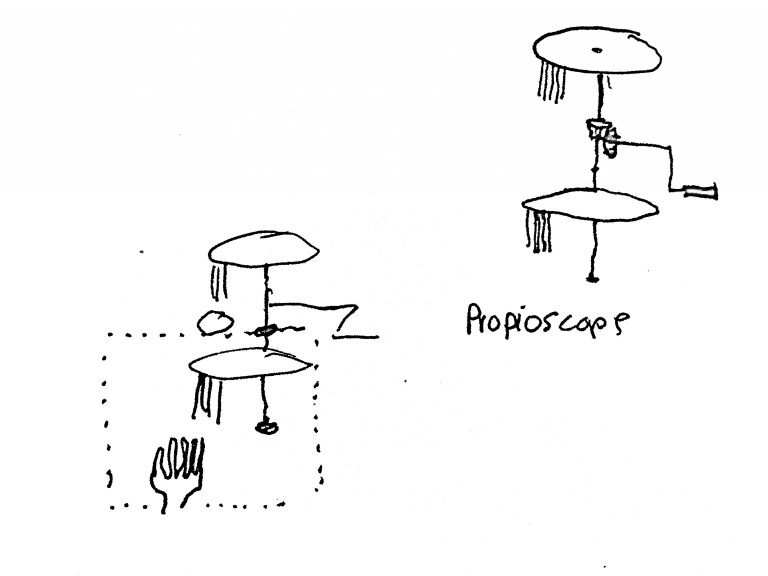 When I first learned about the Rubber hand illusion [RHI] I immediately began to think about ways in which the process could be automated to create an artwork, in which the experimenter’s presence was removed. This could be done using sensors and a microcontroller to articulate solenoids to tap fingers for example. That thought train was on a back burner until discovered the work of fellow MMU PGR Lin Charlston. As part of her PhD research [See her profile here ‘The Multimodal book as organism, artefact and assemblage: non-human agency in processes of growing and making’] She invented a beautifully simple, entirely mechanical device just to do exactly this.

Your hand is placed inside a box, while the other hand turns a crank. On top of the box, another rubber hand is placed. This is where Lin’s experiment takes on its own twist; on top of the rubber hand is a piece of moss. Fixating on this, and turning the crank, a copper disk rotates.  A delicate metal bead curtain brushes over the moss, and over the fingers of the false hand. Simultaneously the hidden real hand receives the same treatment. If the illusion works for you, ownership begins to drift from your real hand to the fake hand. Specifically, the moss begins to feel like it is part of your own hand. [if you are not familiar with the Rubber Hand Illusion check this post]

Although Lin has not settled on a name for the device yet, I couldn’t help trying to think of what one might call such a device and came up with the term ‘Propriosope’ [or Propioscope as I noted] a device for shifting bodily ownership from a body to another body or object [see my post on Unfeaseable objects here…] One could imagine autonomous devices made based on any number of experiments related to the RHI [See my post on Illusions of Invisible, alien hands, 3 arms, and shrinking bodies ]

This has made me reflect on the use of the crank as a convenient mechanism of ‘interaction’. For example; In the RHI synchronous tapping and stroking is essential to generate the illusion. A direct and tangible relationship between what is seen and felt.

It’s difficult for the experimenter to replicate this manually, thus a system that can deliver this automatically could useful. It could also be useful in terms of ‘Augmented Virtuality’ interacting with real-world objects in virtual space.
The crank ensures the participant has their hands arm and body in a certain position. And they probably know how to operate the crank intuitively.

The above sketch shows an idea for an experiment: A version of Lin Charlstons device scaled up to resemble a version of body swap illusion [ Henrik Ehrsson and Olaf Blanke http://www.eurekalert.org/pub_releases/2007-08/ucl-foe081407.php]. In which a VR headset was linked to a live camera feed whereby the participant can view their own body, but from a few meters behind themselves. The experimenter taps their back with a stick. In this crank operated version:

We could try the same arrangement as a physical model, a virtual model viewed in VR. Or linked video, in which the playback is synced exactly with the movement of the crank. How powerful would the effect be? What other Stimuli could be incorporated instead of a tapping ball.

I have experienced something similar in action through an artwork by painter Iain Nicholls and creative technologist Tom Szirtes. ‘Veil’ is a virtual reality work that references early filmmaking, fairgrounds, and the paintings of Velazquez, David Fredrick and Holbein.  The site-specific installation includes a cardboard model house sitting on a plinth and a virtual reality headset which the visitor is invited to wear.

But there is a handle to turn as well, therefore, I would say this verges on Augmented virtuality. I found it to be a powerful effect. I will be writing about this installation and others for the next post…

One thought on “Mechanically Augmented Reality”