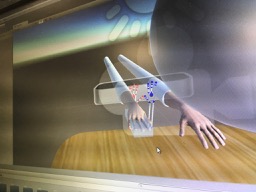 After discovering Sally’s research at the BRnet conference I wanted to experience her experiments, so I asked if I could visit her lab. The VR lab looks like a normal office space, PCs scattered around the outside, and loads of VR tech hanging around. On closer inspection, a network of cameras is installed around the space to enable complex motion capture and augmented reality experiments to be undertaken. There is a treadmill in the corner.

In the experiment I tried, a leap motion sensor captures the movements of your real hand, allowing you to articulate a virtual hand.  The experiment requires some time to become used to the VR environment. At first, I was aware of the hand and arm being in slightly the wrong place, offset from my own. However, I soon adapted to this and felt the avatar hand was entirely my own. The experiment tasked the participant with hitting different sized balls away or towards a target. My immediate reaction was that I could perceive a faint resistance when hitting the smaller balls, Like a phantom touch. This in its self would make for interesting research.

This sensation of touch was not so apparent with the larger balls – which I perceived as heavier and harder to move. I instinctively made more effort to shift these suggesting I was sensing some resistance. Interestingly the balls all had the same virtual weight [in terms of the physics they were programmed with]. With each progressive hit, I was unaware that my hand was growing each time. I felt a sensation that my hand was feeling progressively heavier.

This kind of experiment uses what could be described as Perceptual Motor Synchronisation [we link the behaviour and movement of the object, with our own] whereas the Rubber Hand Illusion [RHI] model relies on “Visio tactile Synchronisation” [we link the sensation of touch to the matching visual cue, in order to embody the object] the limitation of this lies in its static nature. Something I have tried to address through my clay experiments, where the clay hand is modified in real time [insert-link-here] Sally’s work is not so much concerned with an embodiment as such, instead, Sally’s interest lies in how our bodies affect how we perceive the world. This resonates with Ponty notion of ’embodied perception’ as well as fitting with concepts in somaesthetics.

One of her projects uses a treadmill with VR. Investigating the difference between how we perceive a hill from looking at it, and how we perceive the hill through actually walking up it. An example of how our bodies affect the way we perceive things was that older people perceive hills to be steeper.   Our bodies are used as ‘perceptual rulers’ [See link to interesting paper which uses magnifying/minimising goggles to explore this phenomenon.]

“Don’t get hung up on the stimulus!” After explaining my experiments with the clay, Sally suggests the using the Perceptual Motor Synchronisation with VR as a methodology allows for much greater possibilities. VR is the way much experimental psychology is going in regard to experiments with body perception. It was true then I would guess 80 per cent of the posters at BRnet used the RHI as a model for body image. The RHI paradigm is accessible and simple to perform and effective. But VR has opened a huge field of possibilities in this area.

“…The notion that apparent sizes are perceived relative to the size of one’s body is supported through the discovery of a new visual illusion. When graspable objects are magnified by magnifying goggles, they appear to shrink back to near-normal size when one’s hand (also magnified) is placed next to them. When objects are “minified” by minifying goggles, the opposite occurs. The rescaling effect also occurred when participants who were trained in tool use viewed the tool next to the objects. However, this change in apparent size does not occur when familiar objects or someone else’s hand is placed next to the magnified or minified object. Presumably, objects’ apparent sizes shift closer to their actual sizes when one’s hand is viewed because objects’ sizes relative to the hand are the same with or without the goggles. These findings highlight the role of body scaling in size perception…”